Four seasons in one day type day today. It’s been bright hot blue sky summer one minute, then solid heavy rain. Even had hailstones at one point! When the sun was out (as it is now) it was warm, and the water steamed off the tarmac.

Me and the boys went for Sunday Lunch up at the squinting cat with the grandparents. They are off to Switzerland on Wednesday. On the way up I spotted a football in the gutter of a round about, so I went and grabbed it – after checking that it could not have rolled out of a nearby garden – It’s one of them school issue orange mitre footballs. The ones that are designed to give maximum sting when kicked at you on a cold winters P.E.lesson. After the meal, the kids went to play in the wacky warehouse.

The last ever Austrian Grand Prix was on, so in-between my peace envoy duties, I watched the Grand Prix with the other dads in the corner. Schumacher (M) was king of fluke, again, after a time costly pit stop set him back quite a margin. On refueling, the car caught fire 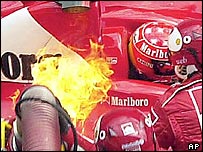 – It’s lucky it didn’t turn into a disaster. Partially thanks to an engine failure in Montya’s car, Schu clawed it back and won.(as he usually has done for the last 6 years).

When our time was up in there, we went outside to try out the new football for a bit, then came home and messed about, watching telly and playing all afternoon.

So now, I’m sat here, the sun streaming in, and the boys as quiet as mice (ish!) in bed. Eirene get’s back in from London at about 11pm, so I think I’ll watch junk telly, and play games.