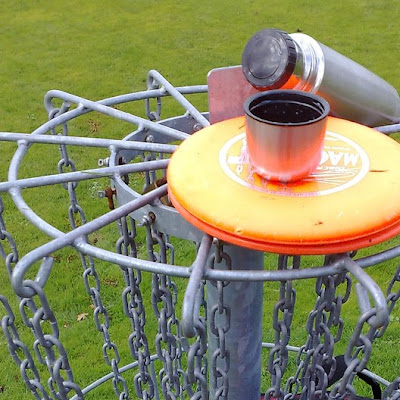 What are those new baskets in the valley gardens in Harrogate?
They are targets for a game called Disc Golf – that’s what.
I was lucky enough to try out the course last weekend with the course designer – Conor Davies. Although the course is not officially open yet, we observed quite a bit of interest from people out for a Sunday walk. “I think it’s some kind of bird feeder” and “what have the council been wasting the bloody money on now” we’re amongst the comments overheard from interested observers of the new furniture.

If you, like most people have not encountered disc golf before, it’s a game that roughly uses the rules of golf, but instead of whacking a ball about you throw these disc instead and play your next shot from where it lies. Instead of heading for a hole on a green, you aim for one of these baskets. The object is to get round the course in as few throws as possible. 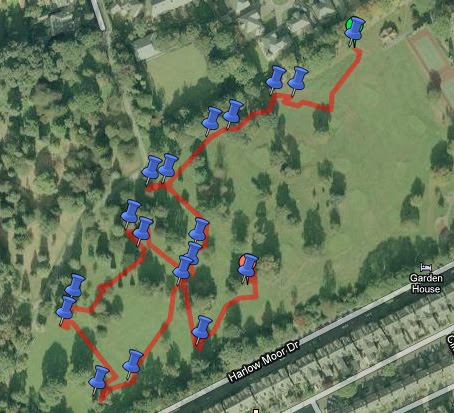 (screen shot of my google map of the course)

The new disc golf (often referred to as “frisby golf”) course is set to open in April 2010 and you’ll be able to hire discs and get access to the course for £2.10 for an adult. There are two types of disk, left handed and right handed.. only joking, there are two main types of disc; drivers – you can get these further but they tend to fade/draw and the more accurate “approach and putt” discs – more accurate without the range.

This 9 hole course, situated around the top of the current pitch and putt course (sharing the same club house to hire the equipment from) itself is quite small by some standards – that but that’s not to say it’s lacking anything that some of the international courses offer. There’s some exceptional ‘through the trees’ action with some holes favouring the left hander, some the right. It’s in a beautiful part of the gardens – a part that is so often just walked through, an arboretum in it’s own right with some lovely little nooks and crannies.

If you’ve not played before, I’d say it’s a great activity to try out – suitable for nearly all ages (if you can throw a frisby, you can play disc golf).