If you hold your hand up to the sun for a second around 1 billion neutrinos will have passed through it. This particle, so abundant in our universe, is a by product of radiation but due to its almost massless nature it is very hard to study. Scientists believe that understanding this ‘ghost particle’ will provide information to everything from the processes that go on in our sun, to understanding the very building blocks of nature on our planet, to why we are made of matter and not anti-matter

In 2004 work started at the Amundson-Scott centre in Antartica on The IceCube Neutrino Observatory. Ice Cube is a neutrino telescope constructed over 1km square of ice and took 7 years to build with a cost of over 250million dollars. It is the biggest neutrino telescope in the world. 86 holes were dug deep down into the polar ice and digital optical modules or DOMs were lowered down. Each hole has a theme and each of the 60 DOMs that are in each hole has a name that reflects that theme. The ice that was dug out from just one of the holes would fill 1 million olympic sized swimming pools.

IceCube in Scale: The dashed lines above represent the portion of the cables that have DOMs attached.

The reason scientists chose this site was because deep ice is very clear, very dark and there is lots of it. High pressure forced the bubbles out and it is very dark so far down. When a neutrino reacts with a particle of ice it creates a muon. This reaction releases a burst of blue light and that is what the DOMs detect. It needs to be very dark in order for the DOMs the be able to detect the muon. The direction and intensity of the light allows the scientists to know where about in the universe the neutrino originated. 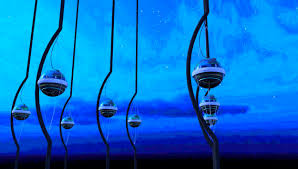 Every summer 200 people embark on the 72 hrs flight to get to the ice station from the northern hemisphere in order to spend their summer there. It can take a while for newcomers bodies to adjust to the thin air and lower pressure. More blood cells must be made to make the most of the oxygen that is available and carry it more efficiently around the body. When not at work there is plenty to do. People form bands, learn Scottish dancing, go to the gym or play other sports . Another activity is interest sharing. People give lectures on their different interests and hobbies and what projects they are running currently. One of the rites of passage is going from the sauna to outside with a drop of 300f, it’s called joining the 300 club. During the winter very few people remain to winter-over. Temperatures get so low that planes cannot land and the sun sets in November and doesn’t rise till February. 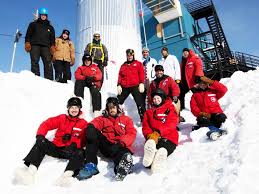 The IceCube project was awarded the 2013 Breakthrough of the Year by the British magazine Physics World. The Antarctic observatory selected for making the first observation of cosmic neutrinos and for overcoming the many challenges of creating and operating a colossal detector deep under the ice at the South Pole.