While Matt and Jaygo braved the elements, Sophie and I decided to take Annie for her first visit to the cinema. We went to the eleven o’clock kids club at the Harrogate Odeon cinema. It used to be one adult free per child but apparently that changed a while ago (shows how long it’s been since we last went). It still worked out good value and we paid £2.50 each with Annie being free.

It’s a popular morning activity and we saw lots of people there we knew. After paying for our tickets and leaving the buggy by the Robo Cop poster for protection, we went upstairs to one of the big screens. We sat right at the front in case Annnie got bored and fancied a roll about. Sophie sat on one of the booster seats which are provided there. They are a great idea and she ended up being taller then I am.

‘The blue umbrella’, was what the short film at the beginning was called. Sophie was very confused and I later discovered she had thought it a very long advert for umbrellas. The story followed the chance meeting of a blue umbrella and a red umbrella. All the buildings and street furniture, which already look like they could be alive were brought to life, very cleverly adding lots of depth and feeling.

There was no dialogue just gentle music and it did remind me of an offering from world cinema.

The main attraction was Monsters University. Sophie breathed  big sigh of relief. I think she had been worried it wasn’t going to ever come on. Annie breathed a deep breath and let out an enormous squeal but it was ok as dotted around the room were other babies letting us know they were there too. Perhaps passing on messages like the sunset bark in ‘101 Dalmatians’. The movie follows monsters Mike and Sully as they attend university to train for their careers as scarers in Monsters Inc. There were some laugh out loud moments such as when they have to avoid the toxic spiney creatures in the scaring competition and a great ending full of mama moral teachings. Sophie loved it, I enjoyed it and Annie was so good that we would definitely take her again. 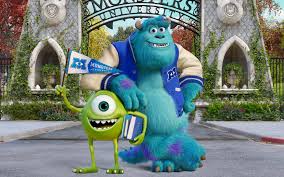