St Bridget’s day is celebrated in Ireland on February the first, said to be the first day of spring. St Bridget was an abbess is Co.Kildare around 470 ad. She was born to a Christian slave mother and druid father . It is said that the druid knew Bridget would be holy because when she was born he had a dream of her being blessed by three clerics. In the dream her father tried to feed her, she threw up on him as he wasn’t holy enough. Her father then sought a white cow with red ears to supply her milk!

Legend has it that Bridget’s monastery was famous for its blueberry jam and so it is traditional to eat jam on St Bridget’s  day. Mary of the Gael, a name she was also known by, was thought to have the power to bless the house by multiplying the amount of bacon, butter and milk. She could bestow cattle and sheep and had power over the weather. St Bridget is also known for being kind, generous and not putting up with any manly nonsense. 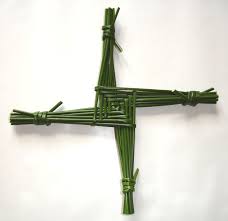